This article was forwarded to me by a friend and co-worker who backpacked the Grand Canyon with me rim-to-rim earlier this year.  He included the message “Here’s another near death for the book Death in the Grand Canyon” (a book that chronicles all the deaths in, on, over, and near the canyon and why they happened).

On my first adult trip to the Grand Canyon we camped at the North Rim the weekend of my 31st birthday. One night we climbed out of the canyon after a day-long epic 16-mile hike to Ribbon Falls and back and were quickly consumed in a thunderstorm that turned our campsite into a creek bed and threatened to wash us right off the rim.  The next day we were exhausted, soggy, and a little giddy.  And thus these were produced: 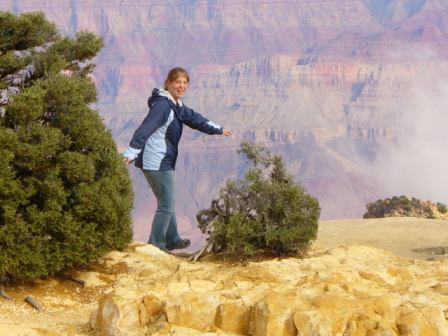 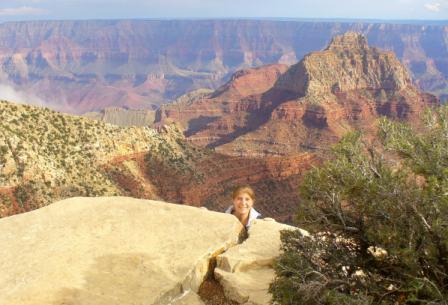 What is it that takes hold of a sensible person and turns them into an irreverent, irresponsible, disrespectful punk towards nature?

Respect is something I’ll return to in my posts from time to time.   As well as finding the present moment.  I challenge myself on a regular basis to try to sit with the moment.  It’s hard at first.  And I find that many times I’m out on a trail or at an exceptionally beautiful place I lose the moment because I’m too busy trying to save the moment for later through a photograph.

Because I’ve been there, I try not to say anything too critical of the guy who tried to take a cool photo and fell 75 feet to near-death.  But that doesn’t stop me from going at the old ladies who attempt to climb a city mountain 1200 feet in incline in 100 degree desert heat with one 12 oz bottle of water and no headlamp and get disoriented to the point they call for a rescue.  Or the folks who drive into obviously flooded streets and strand themselves in their cars. Or the guy who gets summit fever and races up a mountain, leaving all his snacks and nourishment with his friends down below, and doesn’t bring rain gear on a cloudy July day in the mountains of Colorado. Or the….   well you get the picture. ….

It’s all about respect.

This entry was posted in People and the Environment, Willows Wept Review and tagged Grand Canyon, Photography. Bookmark the permalink.
%d bloggers like this: