I started this weekend wanting to write about Tempe Town Lake, which was dammed with eight inflatable rubber bladders for 10 years, up until one segment burst in July and drained the lake. I figured I’d do some reading to learn more about the history of the dam and the inflatable rubber as a dam option, and I’d visit the dam and take some photos and walk around and then come up with some sort of witty retort related to the irony of the situation.

I didn’t expect this witty retort to end up as a weekend research project, but I’ve now saved 50 pages of articles dating back to the 1990s and am reminded of the importance of water quality and non-profit environmental organizations, many of which have fallen victim to a sore economic reality. It took much longer than anticipated to find information not in the largest newspaper and not from the skewed view of a government agency press release.

But I did find quite a bit of interesting information on this weekend quest.

First, on the topic of dams alone, I found that in 2008 there were 252 state-regulated dams in Arizona, of which 100 were “high hazard potential”; meaning, if the dam failed, the consequences would be deep. For those 252 dams, there were only 6 full-time dam-safety employees, meaning that each employee had 42 dams to monitor—seems like a heavy load to me.

Tempe Town Lake is probably considered high hazard since it’s a large recreation lake and attracts more visitors than any other in the state. Tempe Town Lake is about a 2-mile stretch of the Salt River that was dammed in 1999 to create a recreational oasis in the desert heart of metro Phoenix. In 2009, the lake accounted for more than 2.6 million visitors—more than Glen Canyon (Lake Powell) or Lake Mead. The creation of Tempe Town Lake at that time cost $150 million.

The inflatable bladders used for the Tempe Town Lake dam were purchased from Bridgestone, who pulled out of the business in 2008. Inflatable dams were chosen because segments of the dam can be lowered to manage overflowing on the rare occasions when water flows through the Salt River.

In 2006, Tempe learned that the expected 30 year life-span of the bladders was in reality more like 10 years. The Rio Salado Manager at that time said, “The last thing we want to do is prolong use until there is a failure.” But, hey, guess what happened?

Ten years was up in December 2009. In the spring of 2010, Tempe was delayed from starting their replacement project because of weather. By July, one bladder suffered from a seam tear and burst. The cause came back as AGE AND EXTREME HEAT. These bladders were typically reviewed as a good option in very cold climates (Montana and Norway, for instance) as they allow for better adaptability than steel gates in cold conditions. I did not read anything that said they were good in extreme heat conditions–and perhaps that’s part of the reason their life-span ended up two-thirds shorter than originally expected.

This is the only North American Bridgestone dam that has been reported to fail, but “none of the other dams are in such harsh environments.” By 2006, Tempe knew that the intense desert heat and sun damage were good enough reasons to provide a watering system with a continuous flow of water over the dams and a shade system to keep the rubber cool. But they did not make any changes to the amount of heat or light the dams received, and then four years later, one segment failed.

Bridgestone, although not in the business of inflatable dams any longer, is reimbursing Tempe up to $3 million of the costs to replace the dam. The replacement bladders will be leased to Tempe for $1 a month for a period of five years. In five years, Tempe will need to install new dams at the city’s expense, which is estimated to be about $20 million.

ENVIRONMENTAL HISTORY OF TEMPE TOWN LAKE
The lake officially opened in November of 1999. Controversy swirled soon after regarding encephalitis-carrying mosquitoes breeding in wetlands west of Tempe Town Lake, and to a lesser extent east of the lake. The city received several letters from agencies in September 1999 to ask for their concern and help: “The area downstream of the Tempe Town lake dam has become a potential health hazard, due to mosquito breeding activity in the area. Arboviral sampling of the area has found the Western Equine Encephalitis virus present in mosquito samples collected from this area.” Residents were not informed of the outbreak sites, nor of the pesticide applications to deter the breeding. 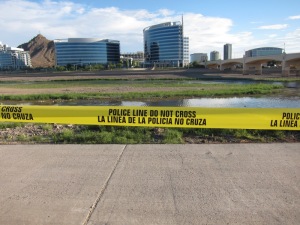 n 2005, duckweed covered more than 15% of the Lake’s surface. concerning Tempe residents about the safety of the water. The city spent $5,000 to spray and kill the duckweed with a herbicide. Duckweed keeps algae population down but kills fish by absorbing oxygen. Tempe boasts fishing as one of the benefits of the Lake. So bye-bye duckweed.

Because of a large amount of evaporation that takes place in the desert, water is purchased from the Central Arizona Project to fill the lake, and water is not often released on the other side, so the lake is mainly a stagnant body of water.

Yet Tempe has hosted the Ironman Triathlon since 2005 with 2,000 participants in full body contact with the water for the 2.4 mile swim. In 2007, this competition generated approximately $5.1 million in economic benefit to the City. The lake is expected to be back up and operating by Nov 1–in time for the $5 million Ironman event, of course.

After the dam burst, fish were stranded in pools of water in the lake bed. Most died either in those puddles or while being fed to alligators or other inhabitants of the Phoenix Herpetological Society. Fish remains were removed by Aquatic Consulting. About 30,000 pounds of debris and trash were removed from the lake bottom.

In September 2010, Arizona was named the nation’s leader in West Nile infections. Most of the 100 cases (and seven deaths) have occurred in the Southeast Valley. (Tempe is in the SE Valley.) The Center for Disease Control is helping determine what species of birds are carrying the virus. (Maybe they should start with the species of birds that were eating the rotting fish after the Lake drained.)

CONCLUSION
After my research session ended, I was talking with my boyfriend about what I’d found. He was questioning my point of view. “What’s your take on it all? What are you trying to get across?”

My main driver is to present information I found that tries to put the background story together, a more honest history than the City’s positively-spun timeline. Most of the information I found came with a clear political bias that had to be considered when reviewing the source.  My point of view can be varied. As a researcher I’ve been trained to objectively look at the data.  I moved to Arizona in 2004, so I don’t know what the area looked like before the lake. I’ve heard that it was treated poorly, that an area of the Salt River was a Superfund site, that 80+ dump sites were mapped at one point. That trash littered the river bed and most people tried to ignore it even existed.

So I guess the lake is a step in the right direction, but I sure do think we could have done something better for the desert wildlife economy with $150 million.

I feel saddened that the economic impact of the lake seems more important than public health, riparian vitality, desert nativity, or straightforward communication. Where have the non-profits who work to educate the public on the environmental history and beauty of the natural state gone?

I’m interested to know if any agency is researching the impact of an economic recession on the nation’s environmental quality. Do folks in policy and in classrooms and businesses treat the environment any differently when they’re struggling to get by?